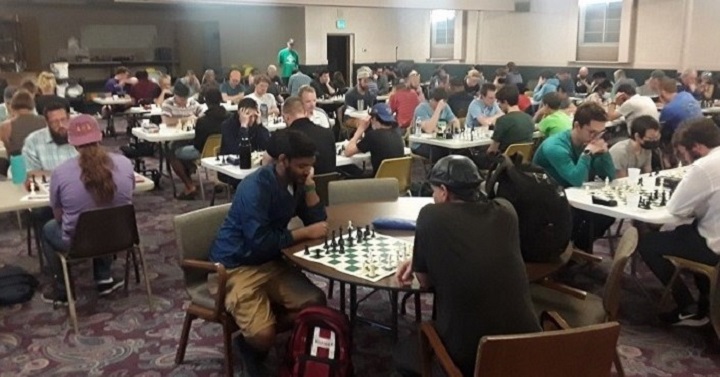 ...by trying too hard to win a drawn position and then blundering away the draw...

DCC attendance continues to grow. I began writing these monthly DCC reports with the DCC Year End Report in 2014. Quoting myself, "...with the relatively low average turnout of 18 players...". Then in the DCC January 2019 Report, i have this: "...For the first time we averaged over 60 players for each round." Thus, I can't tell you how pleased I am to report that we have set another DCC attendance record this month. An astounding 121 players played at least one game, and counting the extra rated games, our average weekly attendance was 81 players. Not to mention the casual players and spectators that are in the room. Over the years, I've gone from constantly complaining about DCC Tuesday night attendance to unabashed bragging :-) 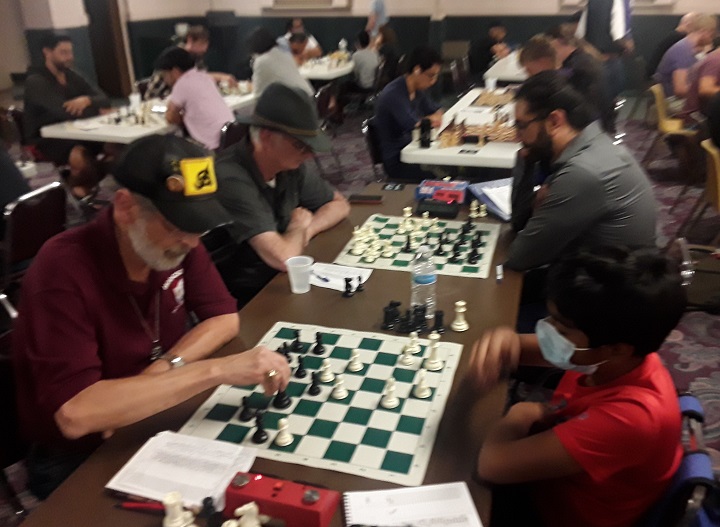 Ricardo Bogaert with the Black pieces, about to make a move.

As a special treat, this month's report includes a sampling of Ricardo Bogaert's chess related Tanka poetry used as picture captions. Ricardo has written several books of poetry in various styles. Contact Mr. Bogaert at - drbogaert@gmail.com - or see him on a Tuesday night, if you are interested in purchasing one or more of his books. He is offering a reduced price for DCC players. Thank you kindly, Mr. Bogaert.

Before getting to who won what this month, first I want to give credit to tech geniuses Chris Peterson and Dean Clow. Their skills have made these DCC reports possible. Self taught, Mr. Peterson created the DCC webpage from scratch. Then schooled me on how to post reports and how to add pictures and games. Chris got his current job by showing his employer the website and they hired him on the spot. 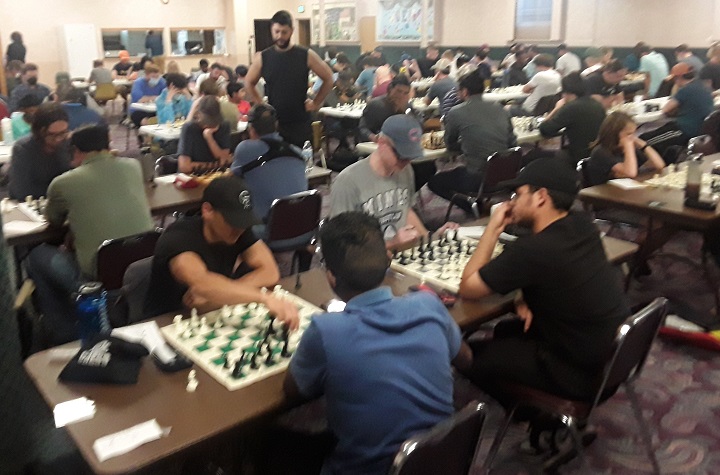 The DCC wouldn't be what it is without what Chris and Dean have done for the club.

Mr. Clow came to the DCC as a TD when we were using SwissSys pairing software. I've mentioned this before, but I still distinctly remember one Tuesday night at the registration table when Dean turned to me and said, "I can write something better than this." A few weeks later we had caissachess and we've been using it ever since. Dean's software makes the reporting of who won what in DCC tournaments convenient and easy. Plus, we have a treasure trove of easily accessible DCC tournament data going back seven years. 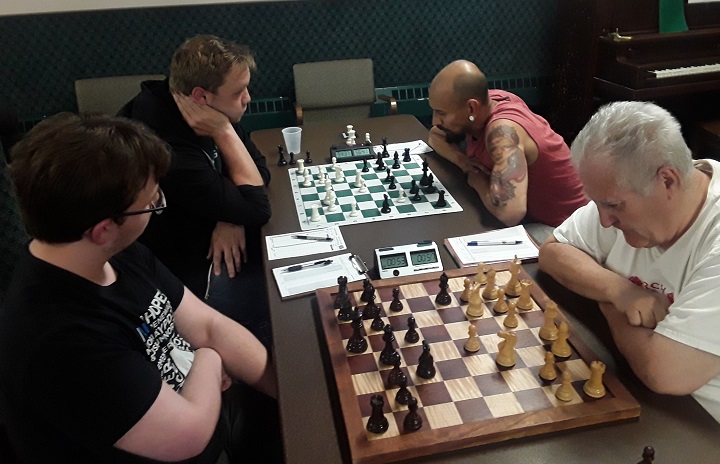 So then, on with the DCC June tournament prize winners. In the Premier section Chris Peterson (see diagrams #1 thru #4a below) took clear 1st place and won 268 dollars and 89 cents with a perfect 4-0 score. I am glad to see NM Brian Wall (diagrams #5 thru #7) scoring 3.5 points and winning the 161dollar and 33 cents 2nd place prize after a long prize money dry spell. The 3rd place prize was shared by Craig Moffit, Edward Yasutake, and Jorge Rubio, who all had 3 points. They each win 35 dollars and 83 cents. 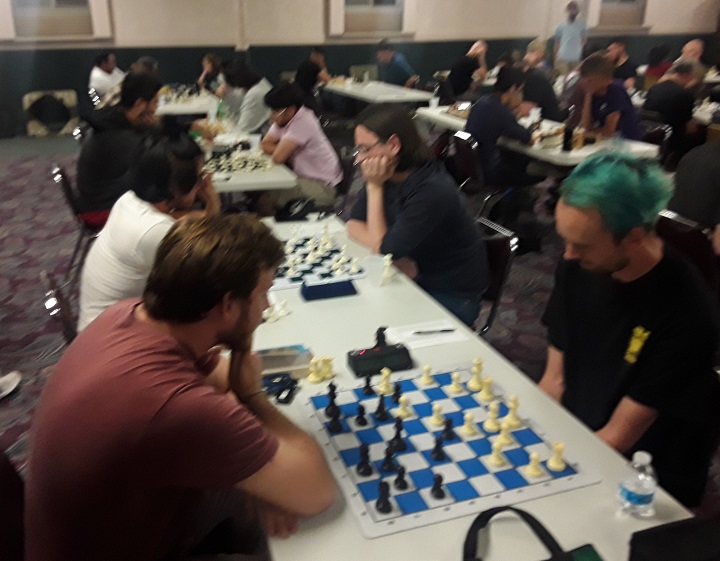 Mark Brown (diagram #15) won the 20 dollar Open Upset prize for his 542 point rating difference win against NM Richard Shtivelband. Mr. Moffit also scored a big upset win against Mr. Shtivelband. (diagram #14) Mr. Rubio had a nice upset win over Habtamu Aseged. Let me mention that I was glad to see Colorado's comeback kid, Griffin McConnell, back at the DCC. Griffin started out with two wins, but then had to face both Chris and Brian, and the result was no additional points. C'est la vie.

The U1900 section was won by DCC tournament director, Phil Brown. (diagram #13) I had the pleasure of helping Phil do this by trying too hard to win a drawn position and then blundering away the draw in our last round game. I am somewhat consoled by my 3rd round win over Haroun Mueller-Omar, (diagram #19) who we all know is a real strong player, Phil's perfect 4-0 score won 260 dollars and 68 cents. 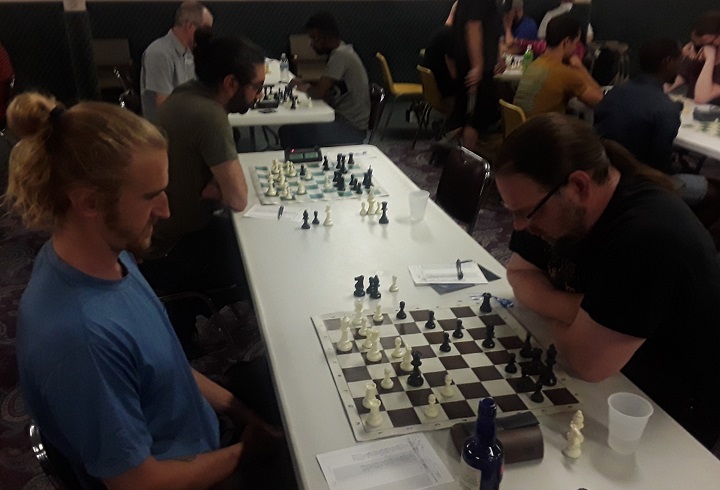 Paul Morgan in the blue shirt against Phil Brown

Charlie Flaxbeard took clear 2nd place with a last round upset win against Luis Jimenez to end up with 3.5 points and take home 156 dollars and 41 cents. Mr. Mueller-Omar, Ken Doykos and I all finished with 3 points and we each won 34 dollars and 76 cents. The 20 dollar U1900 Upset prize was won by Andrew Robichard (diagram #8 and #10) for his round 2 win against Bill O'Neil. I bet between Mr. O'Neil and Randolph Schine that they have combined to play over the years, at least 5000 games at the DCC on Tuesday nights. 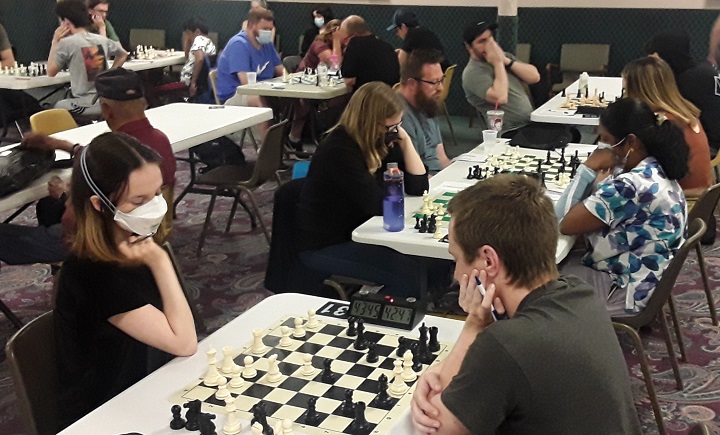 DCC Secretary and TD in training, Madeleine Finch, is playing White against Brandon Morris. It's great to see women playing chess at the Denver Chess Club. It's what chess needs the most.

The U1500 section was won by Matthew Bonham. He also won his 260 dollars and 68 cents prize with a 4-0 perfect score. Thus all 3 sections had 1st place winners not giving up even a draw to their opponents. Seth Fortinsky (diagram #18) joins the other section's 2nd place winners with a 3.5 point final score, and wins 156 dollars and 41 cents. 3rd place was shared by Brandon Morris and Brandon Young. They both finished with 3 points and they each win 52 dollars and 14 cents. The 20 dollar U1500 Upset prize was won by Dan Nolan for his huge 562 point rating difference win against Roger Morris. 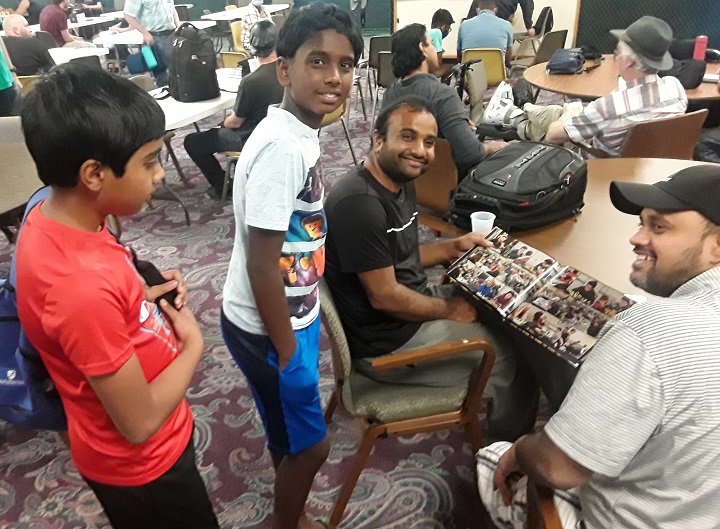 Before the rounds start, players enjoy viewing John Brezina's DCC and International tournament photo books. Contact Mr. Brezina at skibrezina@gmail.com if you are interested in obtaining a copy of any of his excellent books.

I'm pleased to announce that the DCC board has elected to increase our monthly prize payout by adding a 2nd Upset prize. Call it an honorable mention :-) So now for July and going forward we will be paying out $30 and $20 Upset prizes for each section. Also, we will be trying a new time control. Beginning in July, the delay will be 10 seconds instead of 5. The main time will remain at 70 minutes. So now G/70;d10 on Tuesday nights. More time to find the best possible move in every position in every game every time ;-)

Also this from John Brezina: "The Parker Chess Club is excited to announce the return of a very special guest who will be giving a lecture at our club on Monday July 11, 2022 from 6-8pm during our regular club meeting time. We are honored that Sunil Weeramantry will return to give a lecture and sign copies of his books. which we'll have a limited supply of. Mr. Weeramantry is the executive director of the National Scholastic Chess Foundation as well as a member of the USCF Scholastic Committee since 1986. In addition, a FIDE Master and a former two-time New York State champion Sunil is one of the most successful chess coaches in the country. He is also the author, with Ed Eusebi, of the best-selling chess book, Best Lessons of a Chess Coach. His many accolades in chess are too numerous to list here. He is also the step father to Grandmaster Hikaru Nakamura. In addition, we'll have NM Kris Littlejohn in our lecture audience. He is Nakamura's long-time second. Please join us and welcome these two special guests to Colorado at the Parker library upstairs in the Event Hall room A on Mainstreet in Parker, Colorado. Email me with any questions at skibrezina@gmail.com" This will definitely be an instructive and entertaining lecture.

We'll start off the Games Section with Chris Peterson's DCC June games. Chris provides a Note: and his answers can be found below the last diagram.

1) Sent Ravichandran vs. Chriis Peterson. Round 1. Note: "After 19. Bh4 black has a winning tactical shot."

4) Chris Peterson vs. Juan Carlos Brenes. Round 3. Note: "Black has outplayed white in the opening. White just played 20. b3 to prevent Nc4. How can black capitalize on his positional advantage?

4a) the same game Note: "Black is pressing for the win and white is stubbornly defending and just played 55. Rc6. Despite the extra pawn black has let his advantage slip. Where can black place his bishop to keep pushing?"

5) Brian Wall vs. Chris Motley. Round 2. NM Wall says he could have played "safe" in this position with 16. Qb5!! (Brian's exclamations marks) Instead - remembering a Capablanca quote "One pawn may not be enough, try to pick up a second one" - he gives himself !!! for 16. (?) then does not allow Mr. Motley any counterplay for the rest of the game.

6a) the same game. Round 3. After 47. Nd4-e2 it is Black to move. Of course, everyone sees the Queen is attacked. NM Wall played 47...Kf6-g5. Mr. Molina, who is much stronger than his rating, played 48. Ra4-d4. I am not making this up. Don't let anyone tell you there is no luck in chess. With both players in time pressure - Turpana under 1 minute + the delay and Brian under 5 minutes - Mr. Wall went on to win the game. See Mr Molina's. comments and computer analysis.

7) Brian Wall vs. Griffin McConnell. Round 4. In this opening position NM Wall criticizes his move 9. d5. What would have been a better move? See Brian's answer after the last diagram.

8) Andrew Robichard vs. Michael Igoe Round 1. After 17...Kg8-f7, Mr. Robichard says he "Spent about 10 minutes here calculating my best move." What would you play?

10) Bill O'Neil vs. Andrew Robichard. Round 2. A few moves prior to this position, the passed pawn had forced White to give up a rook., and now Black has too many threats to count. It's always nice to have a choice of good moves :-)

11) Juan Brenes vs. Turpana Molina  Round 2. In this position White has just played 32. Bf3-e4 and Black replied with ...Rxg5. Why were both moves not the best for either player? Frankly, computer analysis leaves me bewildered.

12) Sarvesh Rajesh vs. Guillermo Lozano. Round 2. After a hard fought game, the players reached this position and called it a draw. I'm sure the all knowing machine would say one side, or the other is better :-)

15) Richard Shtivelband vs. Mark Brown. Round 3. After 44. Kb1-a2, Black has a mate in 2. NM Shtivelband's comment about this position is; "With 13 seconds remaining on his clock, Mark was able to find a mate in 2. The amazing part was that he didn't realize that he had checkmated me until I pointed it out to him..." Brian Wall, playing on the next board, heard Mark utter something like "oh, it's over". Well done Mr. Brown!!

16) Sikander Baker-Nagar vs. Christopher Motley. Round 4. After 21...Bc8-f5, find the resign forcing move that Sikander played.

17) Abhijay Balamurugan vs. Turpana Molina. Round 4. Final Position. Draw agreed. Mr. Molina's comment is "An unexpected result." I think it's safe to say that the young Abhijay has outplayed the much higher rated player.

18) Douglas Brunner vs. Seth Fortinsky. Round 4. After trading rooks on d5 with 24. Qxd5 Black has a choice of pieces to capture. Would you take the Bishop or the Rook?

19) Haroun Mueller-Omar vs. J. C. MacNeil. Round 3. I was fortunate to win an exchange in the opening and even more fortunate to have reached this position after 61...h3 where all I have to do is avoid Haroun's tricky stalemate traps.

Thanks again to all,