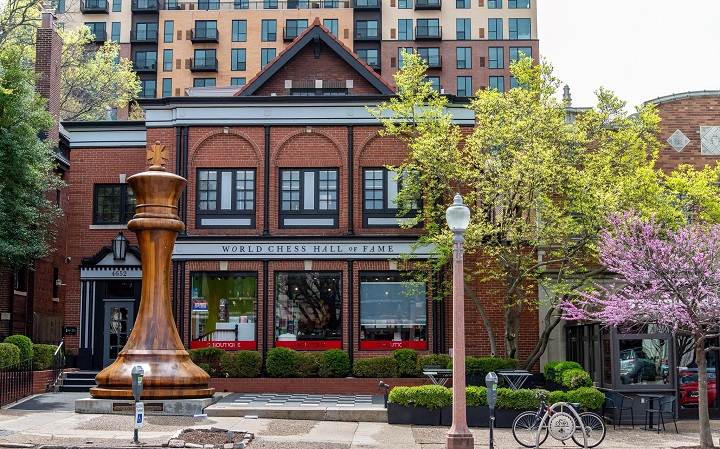 "...  Alice Lee would face Tatev Abrahamyan and set up an incredible confrontation."

Quoting John Brezina: "After a nearly two year absence of spectators at chess tournaments, I’m thrilled to be back in St. Louis covering a new tournament for the best players in America. The American Cup hosts eight of the best male players and eight of the best female players in a new and exciting double elimination format. The matches start out in classical chess and move to rapid and then a blitz armageddon if necessary, combining all three variants to produce some exciting games and time scrambles. And a generous prize fund of $300,000 would generate some great games with no draw offers allowed throughout the matches. Those who lost in the first round got a second chance in the elimination bracket in rapid play to reach the finals." 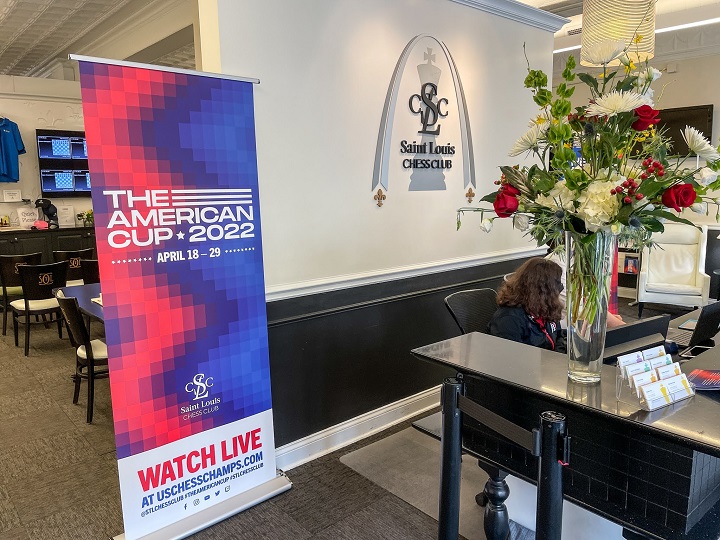 "The week before this event the World Chess Hall of Fame hosted a reception to their latest exhibit, Mind Art Experience. It highlights fifty different exhibitions from the Hall of Fame's first ten years in St. Louis. A great event to meet many of the different artists and chess collectors including John Crumiller and Tom Gallegos, a collector from Colorado." 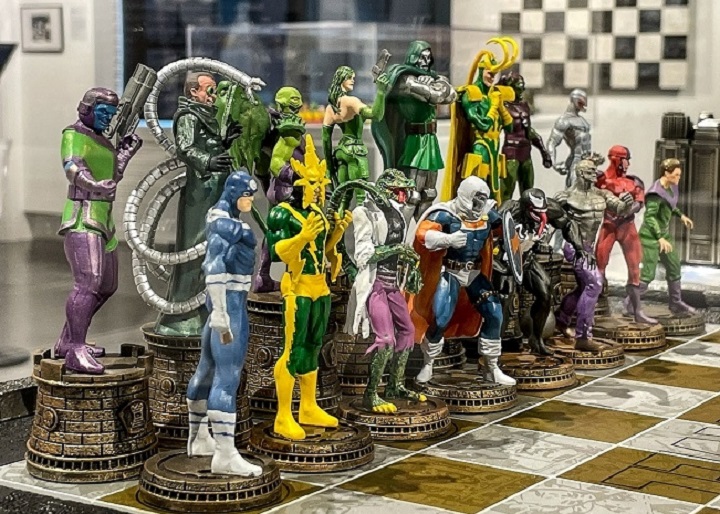 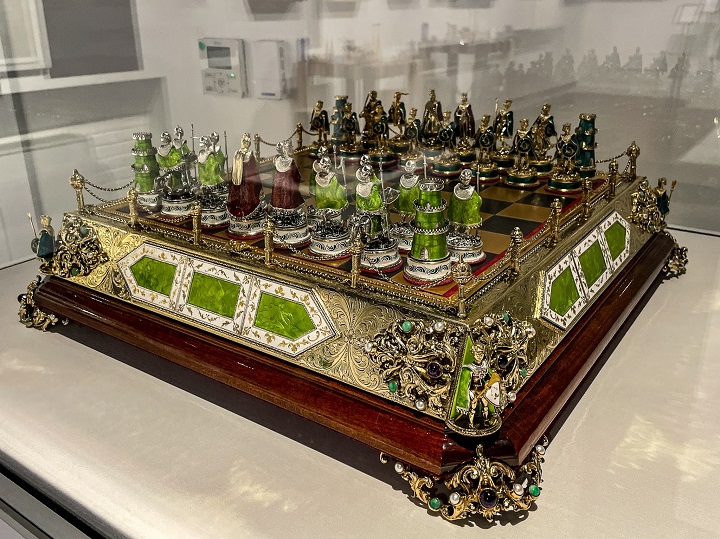 Without question these sets are genuine works of art !!

"The St. Louis Chess Club expansion should be complete near the end of the year, almost tripling the size of the club. And with the United States Chess Federation moving their headquarters here as well, this promises to be the epicenter of chess." 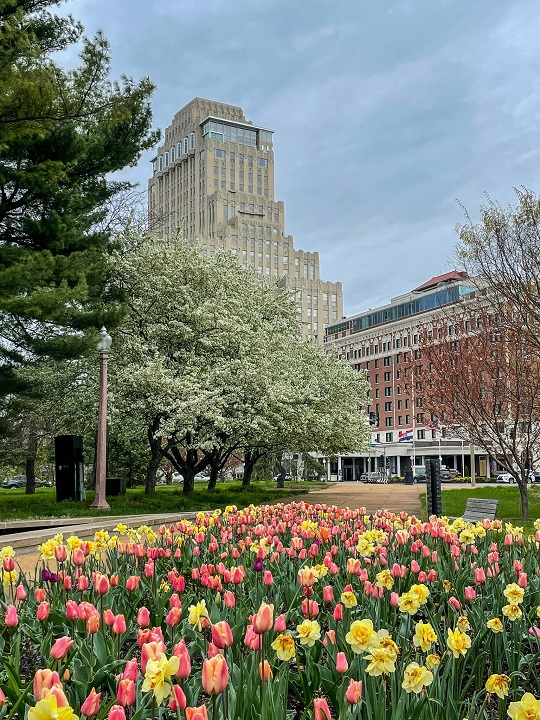 "Springtime in St. Louis is beautiful with the flowers and trees in blossom making this time of year perfect for this new tournament. Tony Rich and the entire staff once again put together another professional tournament. After veteran arbiter Chris Bird gave some final rules to the players, Tony Rich rang the bell to kick off the 2022 American Cup." 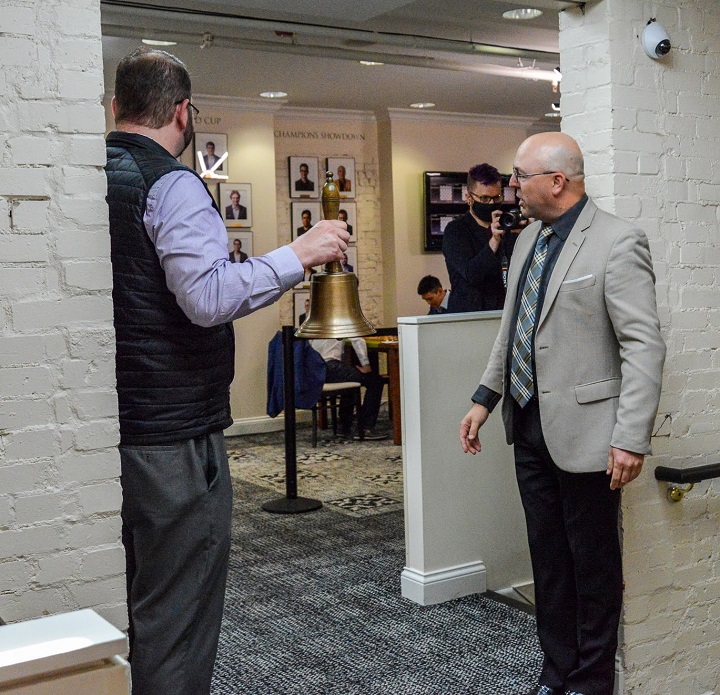 Tony Rich about to ring the starting bell with Arbiter Chris Bird looking on. 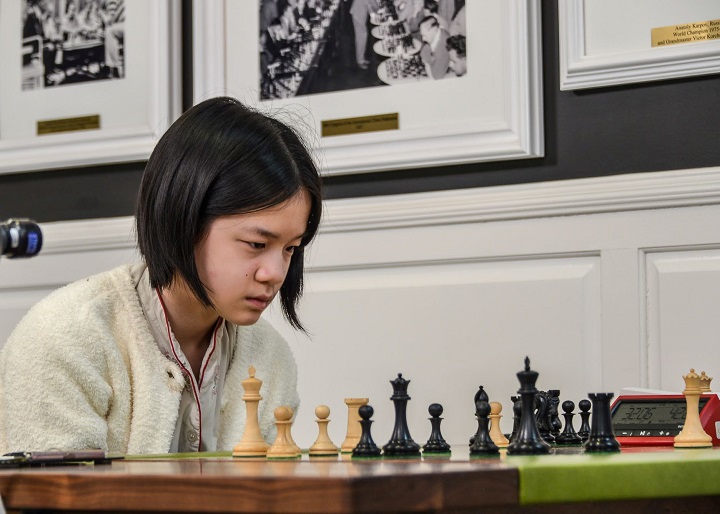 Alice Lee is totally focused on the board.

"I was quite impressed with her poise and professionalism around these veteran players, and more so with her play. Another young player with great potential is the 14 year old Ruiyang Yan. She faced off with veteran GM Irina Krush in the first round match. Players start out with a two game match at classical time controls. If tied then a two game rapid match. And if tied again a blitz armageddon game. This format provided some incredible games and nerves of steel. Most notably in the first round match between Caruana & Xiong. Jeffrey held his own against Fabiano by drawing the two classical and the two rapid games setting up an incredible blitz armageddon finish." 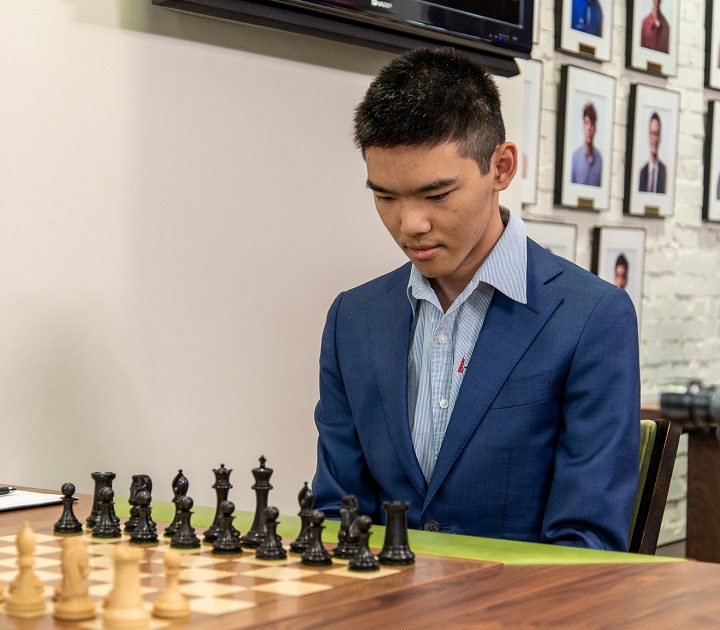 Rising star Jeffery Xiong is ready for the game to begin.

"Fabiano chose white and had to win with 5 minutes to Jeffrey's 4 minutes who just needed a draw to win. Adding to the drama was no time increment until move 60, where two seconds would be added. Jeffrey made it to a winning endgame with a knight and two pawns vs bishop and two pawns. But he was down to 2 seconds on the clock as he was about to make move 60. With a slight hesitation he moved his King to c3, but not before flagging, handing Fabiano the win." 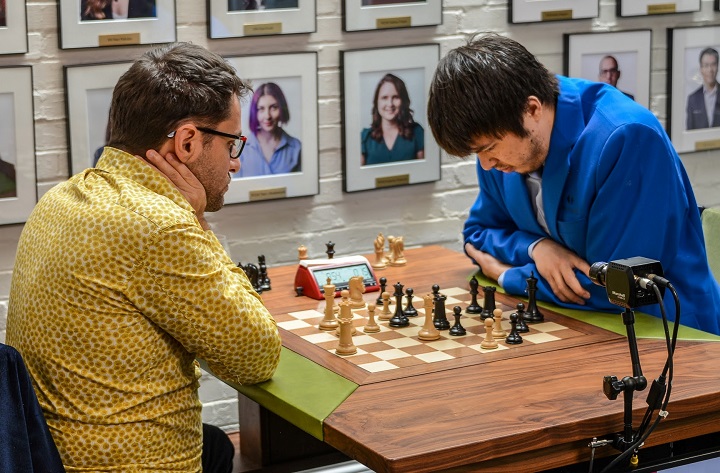 Levon Aronian with the White pieces against Ray Robson

"After this close call, Caruana went on to win the Championship bracket and take first place. His final match was against Aronian who won the Elimination bracket. They would draw their first classical game and Fabiano took the second game and the title with his unstoppable connected central pawns." 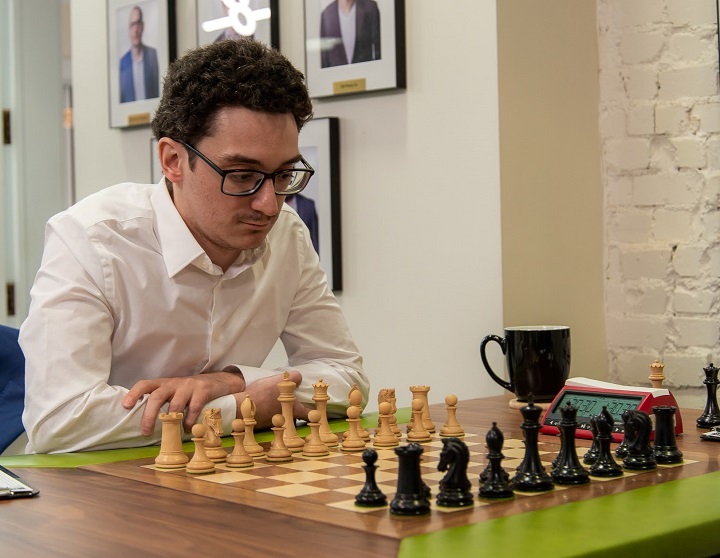 Fabiano Caruana has his coffee and is ready to play.

"Another big upset on the men's side was Sam Sevian knocking out Wesley So in the first round match. I watched their first game closely as it looked like Wesley was in complete control. But Sam's defensive skills shined and on move 34 Wesley erred with Be3 and gave a winning tactical shot." 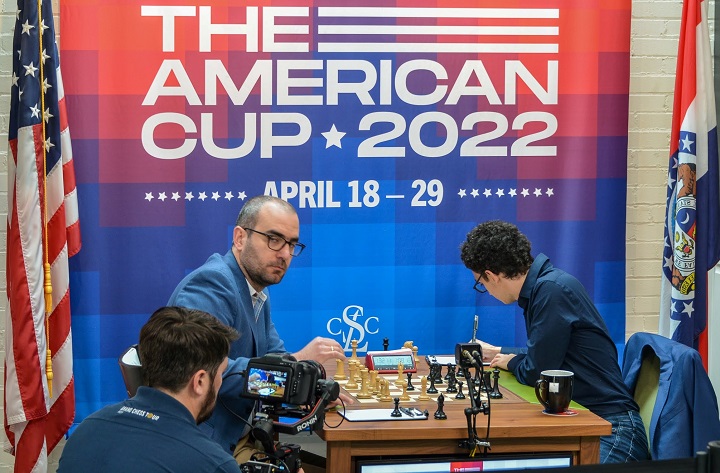 Leinier Dominguez may not be happy with the camera.

"Aronian went on to win his first game with Robson and the match. Ray Robson often would get into time pressure in his games but went on to eliminate Shankland and Sevian in the Elimination bracket. This set up another match with Aronian who would yet again defeat Robson and eliminate him from the tournament. Dominguez knocked out Shankland in their first match after an incredible first game draw. I paid most attention to this game as it appeared that Shankland had the upper hand by putting the squeeze around Leinier's exposed queen. Many of the other players would come by to glance at this epic battle that ended in a draw." 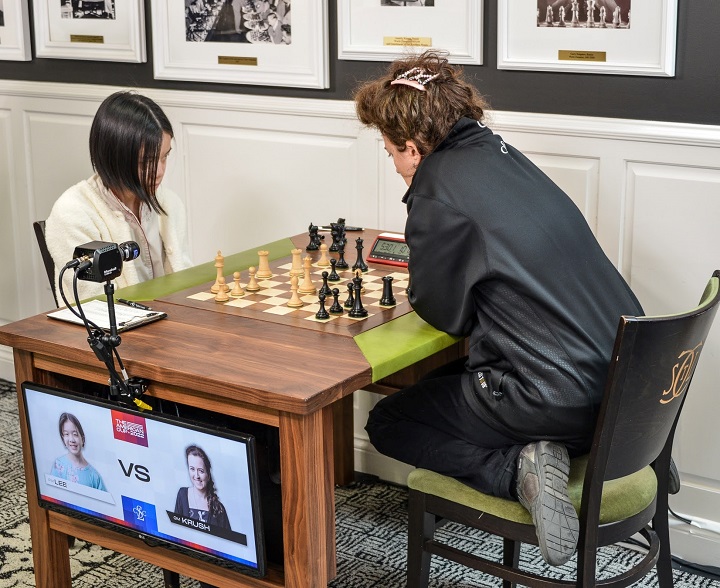 Here the young Alice Lee is staring down Irina Krush.

"Irina Krush faced some tough competition, especially from the youngest player Alice Lee. They faced off in the last match of the Championship bracket which Krush would win and knock Lee into the finals of the Elimination bracket. There Alice Lee would face Tatev Abrahamyan and set up an incredible confrontation. Alice won the first G25 rapid game and forced Tatev into a must win game, which she did. Tatev went on to win their first G10 rapid which then forced the young Lee to a must win game, which she did.  Then a blitz armageddon where Tatev chose white and needed to win. Needing only a draw, the young Lee showed great tenacity and won the game with an unstoppable h pawn. This put her back into the finals with Irina Krush. The veteran Krush would win game one and draw the second to secure the title." 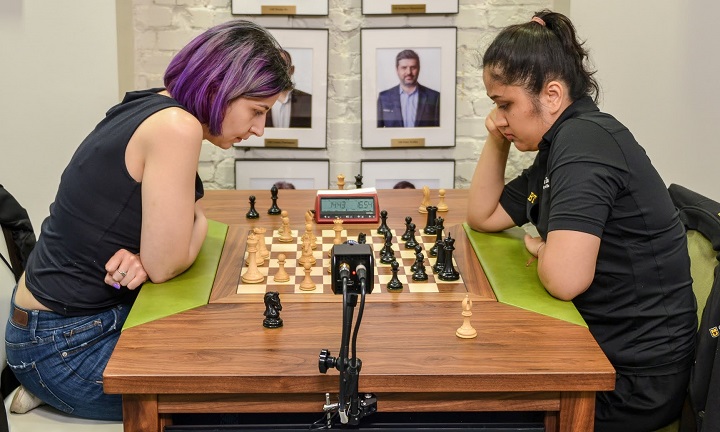 "Gulrukhbegim Tokhirjonova had a great start dispatching Katerina Nemcova and later losing a great battle against Tatev Abrahamyan. Alice Lee and Stavroula Tsolakidouy started the tournament quietly with two draws but then Lee turned it up by winning the two rapids and starting a great run. And former US Champion Anna Zatonskih struggled with losses in the first match in the Championship and Elimination brackets by getting into time pressure." 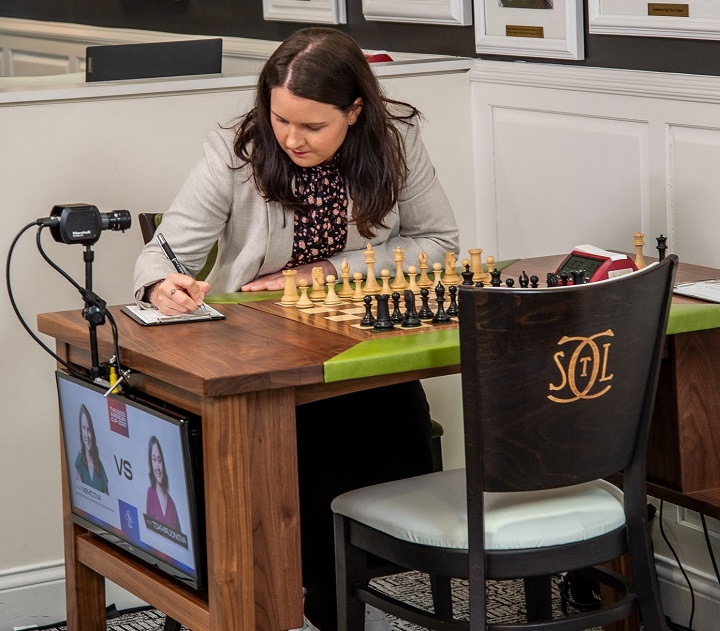 Katerina Nemcova filling in her score sheet before the game begins.
"Overall a very exciting tournament where I was able to attend day one for the opening and then returned for matches 11 & 12. The elimination bracket was certainly the most exciting for the fans being all rapid and blitz games. Even with the increment time controls, many games ended in time pressure struggles." 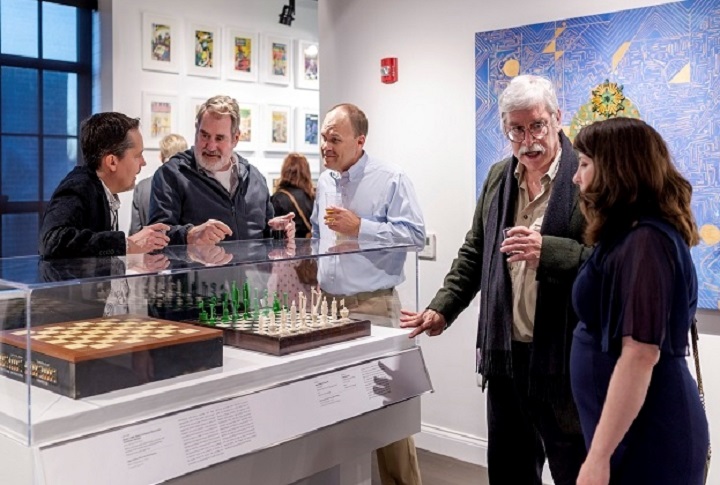 John Brezina (center) with World Chess Hall of Fame officials.
"Afterwards each day one could always find a casual game of blitz downstairs with many of the locals. Personally this is my favorite part of visiting St. Louis watching and playing a little casual blitz and making new friends through chess. There are also occasional lessons and lectures by resident players and I was fortunate to attend one given by WGM Dorsa Derakhshani. Those who live near the St. Louis chess club are lucky indeed having such a wealth of chess knowledge and culture at their disposal." 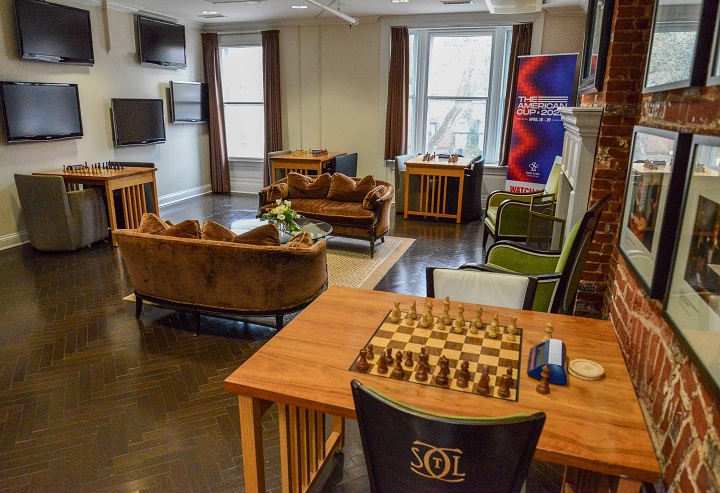 "I hope to see this as an annual tournament and believe that even bigger things are to come as the club expands. It was an absolute honor and pleasure to once again be able to photograph these incredible players. I've included links to all my photos from the rounds I attended along with the latest Hall of Fame exhibit. The work and collections of chess items they house is truly a treasure trove for the chess fan. Thanks once again to J.C. MacNeil for his work in putting this together for the Denver Chess Club in his report."

As always, I am pleased to select and caption Mr. Brezina's great photography from the national and international chess tournaments that he is privileged to attend. Thank you kindly, sir.