Corona Virus Announcement
As concerns grow about the potential impacts of COVID-19/coronavirus, we want to ensure the DCC patrons and Colorado chess community that we have been monitoring the norms and practices set forth by other chess clubs across the country as well as local business, governments, and schools. With that being the case, we have made the decision to temporarily close the club. There will be no in person Denver Chess Club activity until further notice. To participate in online events, visit the Denver Chess Club team on Lichess. 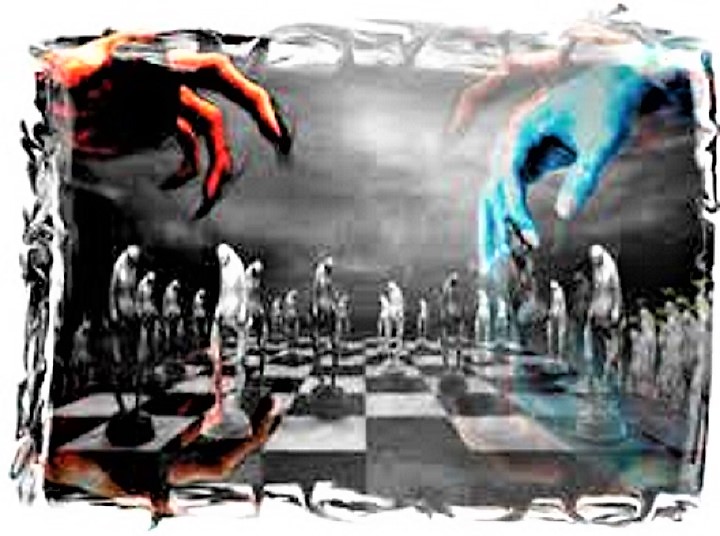 Thanks to Alayne Wilinsky, the DCC is not totally dead in the water.

The title of this report is from an album by the Thievery Corporation. The title song includes the lyric: "It seems like they want us to be afraid..." Another song that I think applies to the times we are living in is by the Drive-By Truckers, "Shut up and get on the plane" which includes the lyrics: "When it comes your time to go there ain't no good way to go about it" and perhaps even more true, "Living in fear is just another way of dying before your time". We are all concerned about the coronavirus, but let's try our best to not be afraid. The heading photo is eerie chess art. Kind of like the eerie coronavirus. 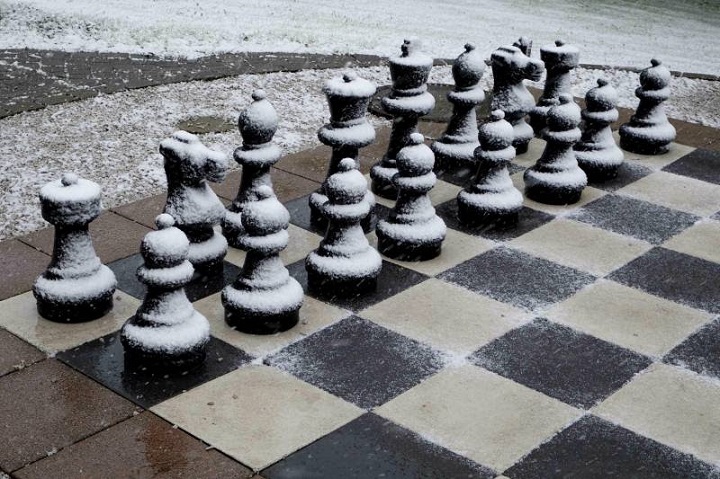 Maybe we will all have to start playing outside, and make sure we have 6 feet of social distance at all times :-)

There will not be a DCC Tuesday night tournament report till the end of April, if then. COVID-19 is having a worldwide effect on chess tournaments, as well as here locally in Colorado. Just as it is having a huge effect on other sports and all walks of life. The virus has exposed just how fragile is what we have always taken for granted - the American way of life. Never would I have thought there would come a day in America when I would go to the supermarket and not find toilet paper in stock. Or rice. Or beans. When I could not go out to the chess club. When I could not sit down and have a meal in a restaurant. When I might be required to "shelter in place". And I'm really getting tired of washing my hands with soap and hot water for 20 seconds, 20 times a day :-) A friend of mine said - "I think the toilet paper shortage comes from the fact that since the plague hit when someone coughs 10 people crap their drawers." Cracked me up :-) 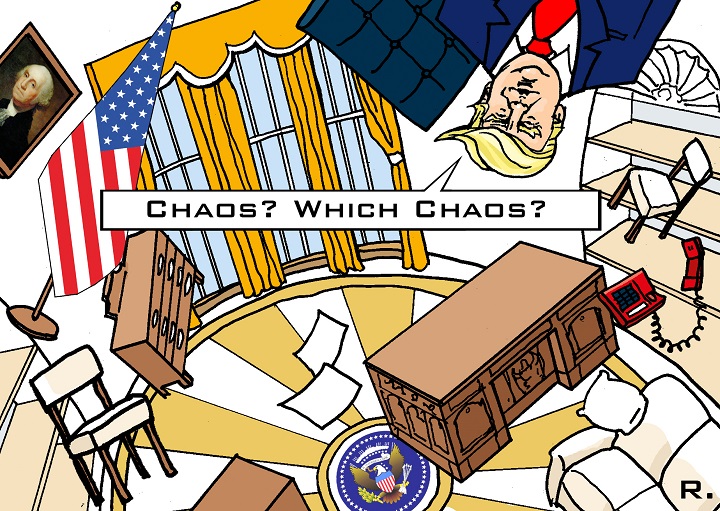 Quoting Rick Rojas - in an article entitled "All around us is chaos: Inside a rural town upended by the virus" in the New York Times - "But this was a different kind of threat, insidious, invisible and boundless, with no one knowing how it arrived in Cynthiana, how long it would last or how far it would spread." Pretty much says what we all know now, and more worrying, what we don't know. Will it go away? Will there be a vaccine? Will it come back?  Maybe, maybe, and almost certainly. 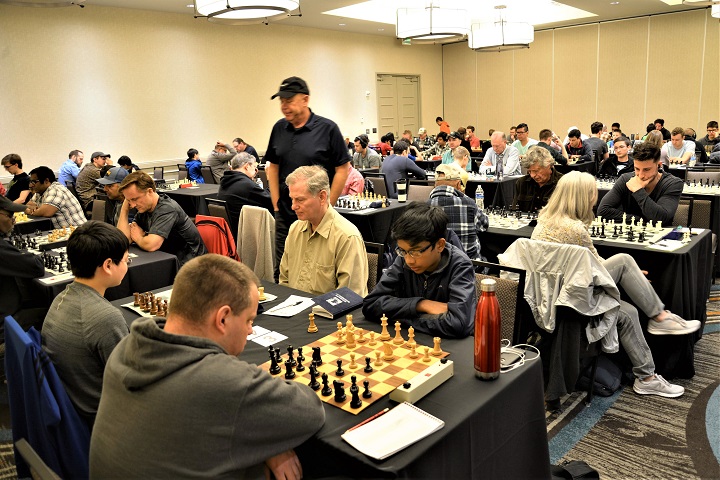 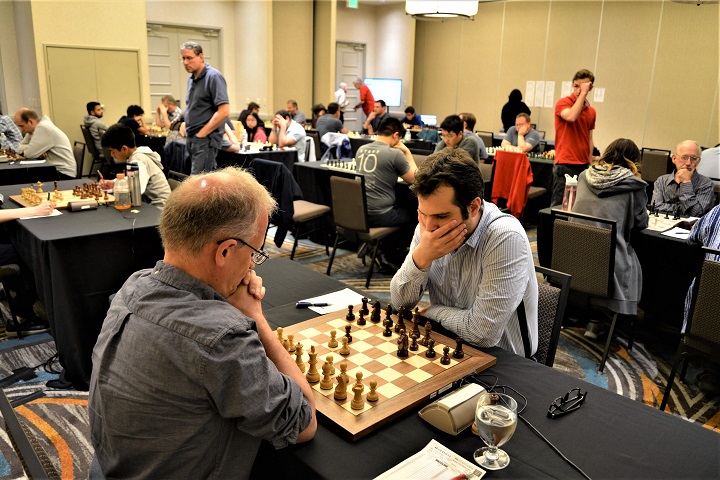 ...with plenty of GM/IM talent in the 2019 Championship section room.

The DCC put a lot of effort into making the 2019 Denver Open the big success that it was. We felt like we had put Denver on the national chess map, and fully intended to capitalize on that fact by making the 2020 Denver Open bigger and better. When the first isolated cases of the coronavirus appeared here in the United States, I don't think anyone thought it would affect daily life across the entire country or imagined how quickly the disease would spread.

"Man makes plans and God starts laughing", and "the best-laid plans of mice and men often go awry", are sure apt expressions. Summing up the wreck of our plans for a bigger and better 2020 Denver Open. So disappointing for us all. But, in light of all the other chess tournament cancellations, and going by the recommendations from the Center for Disease Control, we felt it was prudent to discontinue meeting on Tuesday nights for a while and cancel the 2020 Denver Open. Erring on the side of caution. Being safe rather than sorry. 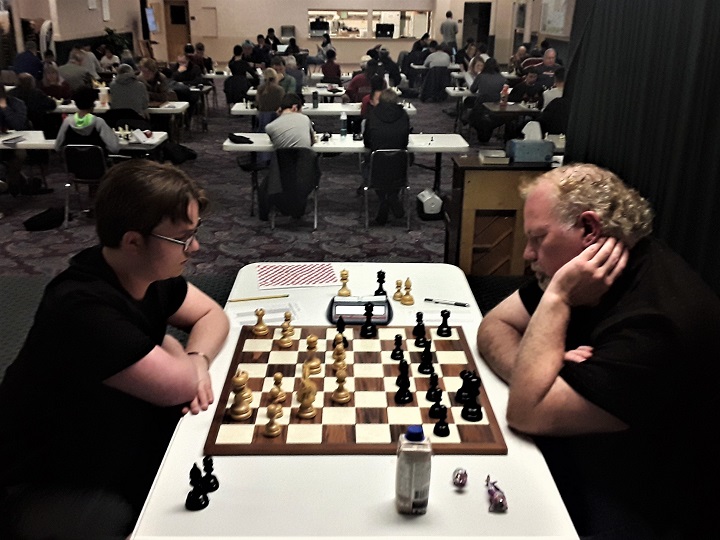 In the match Griffin McConnell vs. Earle Wickle, after 2 games, Griffin is leading with 1.5 points... 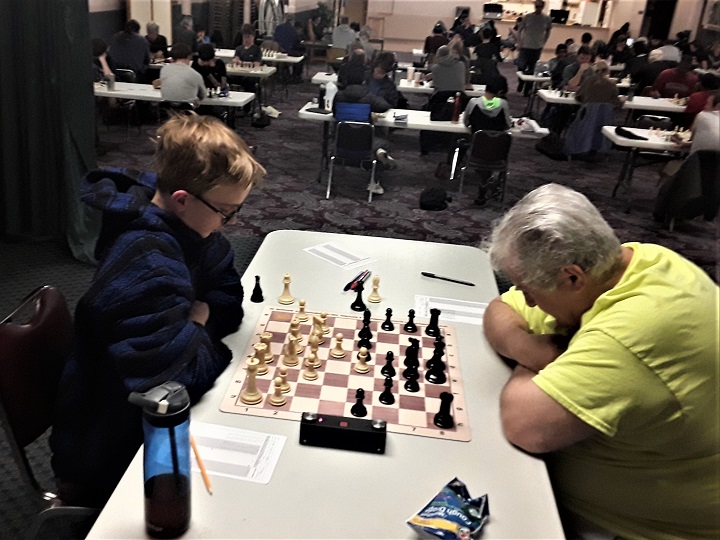 We plan to begin meeting again on Tuesday, April 14th. Combining the first two weeks of March with the last three Tuesday's of April to make a 5 round tournament. Also continuing the match games between Brian Wall vs. Sullivan McConnell and Earle Wilke vs. Griffin McConnell. The date is of course tentative. Going by the latest CDC guidelines, we might have to postpone DCC Tuesday nights till May. I sure hope not into June. Check the notice on the DCC homepage for updates. 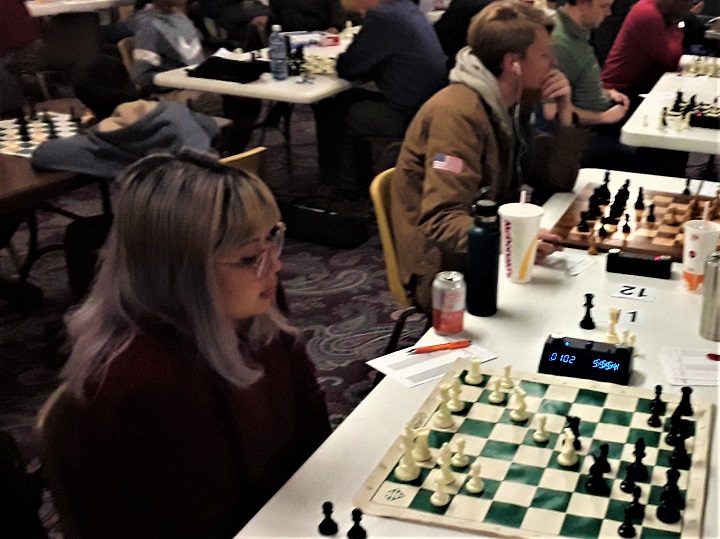 Alayne Wilinsky and Elijah Warwick playing their round 1 games. Both are DCC board members.

Thanks to Alayne Wilinsky, the DCC is not totally dead in the water. Ms. Wilinsky, on her own initiative, has put the DCC on Lichess.  Alayne has and is organizing already popular weekly online blitz tournaments. Alayne is personally donating a 100 dollar prize fund to this coming Tuesday's (03/24) tournament, and it's free entry. How cool is that?  I believe she also plans to arrange longer time control tournaments. I encourage all DCC members, and others to join and support Alayne's endeavor. 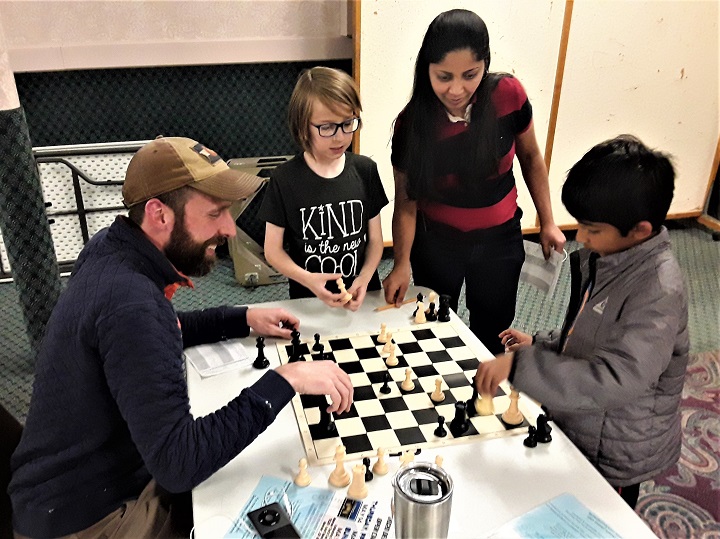 This is what's missing from online chess. The in person, friendly analysis after the game.

We are all in this together and sooner or later we will be back. Facing off across the board. Live and in person... maybe :-)